A pioneering technology to treat sepsis

According to WHO sepsis affects ≈50 million people worldwide each year and  ≈11 million people die each year because of sepsis. The major treatment of sepsis today is antibiotic treatment. The disease is becoming increasingly difficult to cure due to antibiotic resistant bacteria. WHO is making the fight against Sepsis and Antibiotic Resistant Bacteria a priority.

Sangair has developed a groundbreaking system to treat Sepsis. The system allows for a mild treatment of the patient’s blood using active oxygen.

The system can be attached to a patient and therefore slow down and control a sepsis infection by killing bacteria present in the blood. Another positive fact is that it also oxygenates the blood, which is beneficial due to the fact that oxygen levels usually are low in Sepsis patients.

If SangAsept can show that it saves One life with severe Sepsis, it will be a standard equipment in every Intensive Care Unit in the world. This may become the first real alternative and innovation since the discovery of Antibiotics to treat a bacterial infection in blood.

The results up until today are;

The Sangair system will perform a mild treatment of the patient’s blood using active oxygen. The treatment is done by extracting blood from the patient, treating it with gas, and then the blood returned to the venous system of the patient.

The company will investigate effects on other bacteria as well, such as Streptococcus. Sepsis caused by E. coli and Streptococcus represent most of the sepsis cases.

Technically, the Sangair device will consist of a computerized machine and a disposable set that enables user friendly and controlled treatment with active oxygen. It can be described as a combination of a dialysis machine and a heater-cooler unit from the heart-lunch machine industry. 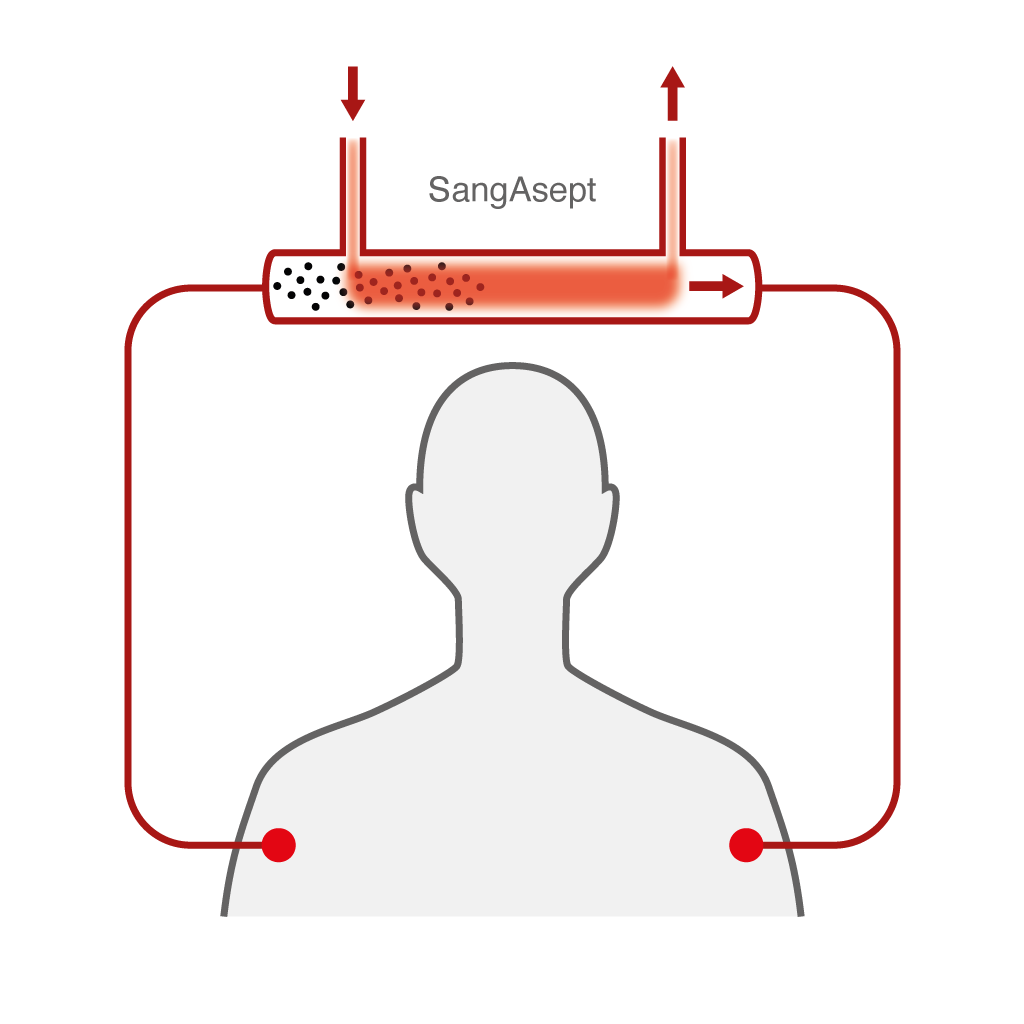 SangAsept treats the blood outside the body. It kills bacteria and oxygenates the blood at the same time leading to a reduced infection.

Sepsis is a systemic infection that many times leads to complications and death. Bacteria, primarily E. coli, Streptococcus and Staphylococcus are behind 90% of sepsis cases. Another 10% is caused by fungi and a minuscule percentage of viruses.

World-wide, ≈50 million people develop sepsis each year, and as many as 11 million people die from the disease. Annually are the costs associated with treating sepsis 15 bn USD in the US alone. Severe sepsis and septic shock patients account for up to 20% of all intensive care unit (ICU) admissions and require expensive and highly variable treatment and diagnostic procedures.

The most common treatment of sepsis is the use of antibiotics and especially the usage of Broad Spectrum Antibiotics that is a common procedure for later stage sepsis patients. WHO reports that antibiotic resistance is rising to dangerously high levels in all parts of the world, threatening the ability to treat, among other diseases, sepsis. It is harder, and sometimes impossible to treat these diseases as antibiotics become less effectiveP4FP.

In 2015, Johan Sjöholm and Professor Lennart Ljunggren came up with the invention to treat blood of sepsis patients through a method that combines prior art with new discoveries. The system and its process is patented.

They had previously discovered that Escherichia coli (E. coli) microorganisms were killed using active oxygen with no adverse events of proteins and fats.

In 2016 Sangair was founded and the first animal trials were carried out in Lund in August 2016.

Today Sangair is conducting Pre-clinical studies on E -coli contaminated animals as well as deeper In Vitro studies according to new regualtions. The plan is to carry out clinical studies in the next couple of years and subsequently apply for CE certification.

Sangair is located at Medicon Village in Lund and at Karolinska Science Park in Solna, Sweden.

If you need more information do not hesitate to contact us.